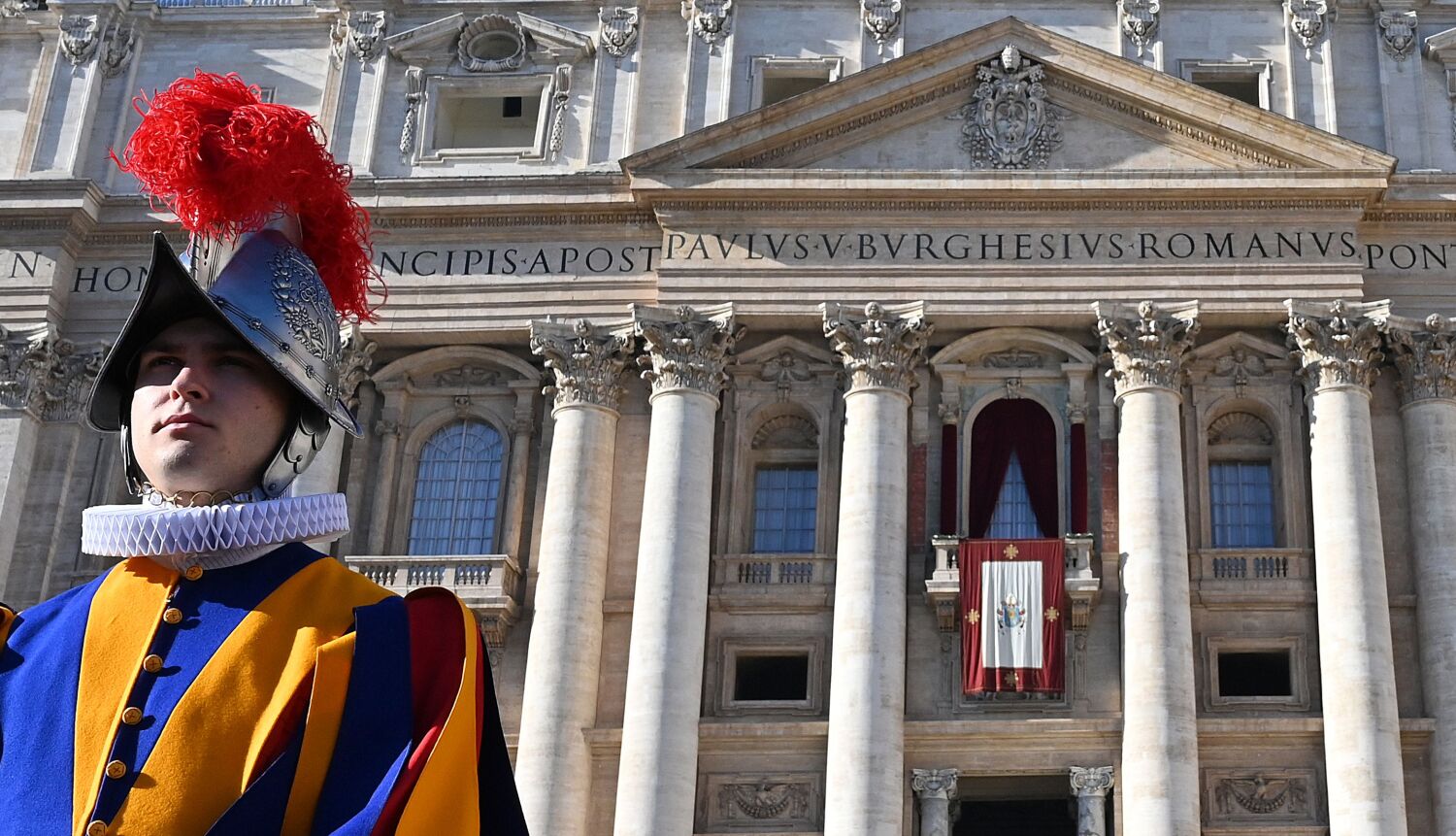 The walls around the Vatican have protected the tiny city state from invaders for centuries and today insulate its rolling gardens and hushed offices from the cacophony of Rome’s traffic outside.

But neither the walls nor the Vatican’s army of Swiss Guards has been able to stop a modern-day plague from creeping in.

The coronavirus has forced 60 million people into lockdown across Italy, claiming more than 1,400 lives and infecting nearly 20,000 people.

It has also upended centuries of tradition at the Vatican and in churches around the country, prompting the Vatican to experiment with teleworking and priests to deliver blessings from the back of moving trucks.

The first coronavirus case at the Vatican was reported on March 6, when a prospective employee taking a medical test at the Vatican’s health clinic was found to be infected.

Five others who that person had been in contact with were placed under quarantine, but officials also soon realized that the victim had attended a Feb. 26-28 Vatican conference on artificial intelligence. As a result, warnings were issued to fellow attendees, including senior staffers of IBM and Microsoft.

By last Sunday, as Italy initiated its first major lockdown, in the northern region of Lombardy, the Vatican had swung into action, shutting its museum and the Sistine Chapel, which massive crowds pack daily to catch a glimpse of Michelangelo’s depiction of God giving life to man. At this point, the attractions are closed to the public until April 3.

Meanwhile, Pope Francis’ Angelus address was livestreamed on big screens in St. Peter’s Square in the hope that his physical absence would deter crowds from gathering.

Speaking from the library of the Vatican’s apostolic palace, Francis said in his address that he felt “a little bit caged.”

But he was not the only one in the 108-acre city state facing inconvenience.

Scholars who had arrived from all over the world for the long-awaited opening of the Vatican’s wartime archives were asked to pack up and leave. Moreover, a crackdown on visitors from outside the walls was announced, meaning the public has been temporarily shut out of Masses that Francis holds each morning at the chapel in his Vatican residence.

Staffers were asked to avoid congregating at the Vatican’s coffee machines, stay a yard apart and use the stairs instead of elevators. Later in the week, plans were launched to keep the Vatican’s departments open while encouraging work-from-home arrangements by staff, except those whose work was covered by “Pontifical secrecy.”

Outside the walls, the Italian bishops’ conference announced the suspension of all public Masses — although churches remained open. Also postponed were religious weddings and funerals, matching the Italian government’s decision to close all museums, cinemas and theaters.

In Bergamo, in northern Italy, the chapel at the city cemetery was converted into a morgue to handle the dead. In Bibione, near Venice, local priest Andrea Vena figured out a way to get around the ban on Mass in church. Loading a statue of Mary on the back of an open-bed truck, he climbed on board and preached as his improvised Madonna-mobile toured neighborhoods.

“People were in tears when they saw me,” he said.

By Monday night, Italian Prime Minister Giuseppe Conte ordered the lockdown of the north extended nationwide, allowing people to travel only to
essential jobs, and warning others to stay at home.

In Rome, church historian Alberto Bartola said the only time he knows of that Masses have been suspended in the city was in 1155 during a revolt against the papacy. He then added, “I would like to confirm if that was the last time, but due to the lockdown I cannot get to my university library to check.”

The department in charge of the Vatican’s vast real estate portfolio announced it would allow people in its properties across Italy to delay rent payments. Inside the Vatican, officials closed the department store, which is housed in a former train station.

The Pontifical North American College in Rome, which trains seminarians for priestly ministry in the dioceses of the United States and elsewhere, half the seminarians have returned home.

The Vatican’s pharmacy and supermarket stayed open but “entry is controlled to keep a limit on the number of people inside,” said Vatican spokesman Matteo Bruni.

On Tuesday, Francis appeared to violate Italy’s “stay at home” policy. In his livestreamed early morning Mass, he told priests to visit parishioners to offer comfort.

The move appeared to be a sign that Francis was not totally convinced that contact between priests and their flocks should be shut down altogether.

But on Thursday, Cardinal Angelo De Donatis, who administers Rome’s 900 churches, ordered all of them to shut their doors altogether, a decision he said he took after meeting Francis.

“Let’s remember that this rule is for the common good,” he wrote, adding, “We recall the words of Jesus, ‘When two or three people come together in my name, I am among them.’ At this time, more than ever, our houses are domestic churches.”

Then, on Friday morning, Francis appeared to have a change of heart. Before his Mass he warned,”Drastic measures are not always good,” declaring that priests should not leave the “people of God alone.”

The same day, after another meeting with Francis, Cardinal De Donatis partly overturned his closure of Rome’s churches, allowing many to stay open.

Father Gregory S. Apparcel, the Los Angeles-born rector of St. Patrick’s Church in Rome, said the suspension of public Masses had been “trying and frustrating,” but he was now transmitting his Masses on Facebook and Twitter.

“It’s been a difficult challenge to reach out to everyone,” said the priest, who is chaplain to the U.S. community in Rome.

Even though his church is still open, he said he was not allowing employees to come to work because he did not want them to use public transport. “Myself and a fellow priest are doing two-hour shifts in the church,” he said.

At dusk on Saturday, an army checkpoint on Via della Conciliazione, the broad avenue leading up to St. Peter’s Square, was turning away traffic, while beyond, the atmosphere in the square was surreal.

Instead of the usual bustling crowd of tourists and pilgrims, a police car was parked in the center of the deserted piazza, its blue lights reflecting off Bernini’s famed colonnade. The only noise was the sound of the fountains and the screech of parrots in the trees beside the square.

Around the edges of the piazza, dozens of homeless men and women were the only spectators. Drawn to the square by the showers set up by Pope Francis and usually invisible among the crowds, many were hoping for a hot meal.

“I’m waiting to see if they are still serving at the soup kitchen here,” said Faouzi Herni, a Tunisian man who has lived in Rome for 30 years. “I’ve never seen this place so empty,” he added.

“We need to accept this lockdown, it’s for our own good,” said Sister Beatrice, an Indian nun who was hurrying across the square to get home.

Giorgio, a 73-year-old local man who declined to give his full name, sat on a marble bench on Via della Conciliazione with his wife, both wearing face masks.

“We have come out to watch the dusk,” he said. “Having all this beauty to ourselves would be very special if it wasn’t due to such a tragedy,” he added.

Italy’s lockdown measures are due to end on April 3, but only if infection rates fall by then. That’s just two days before Palm Sunday.

Late Saturday, the Prefecture of the Pontifical Household announced that, due to the emergency, all Holy Week celebrations would be held without “the physical presence of the faithful.”

In addition, the pope’s general audiences and the Angelus will be live streamed through April 12.