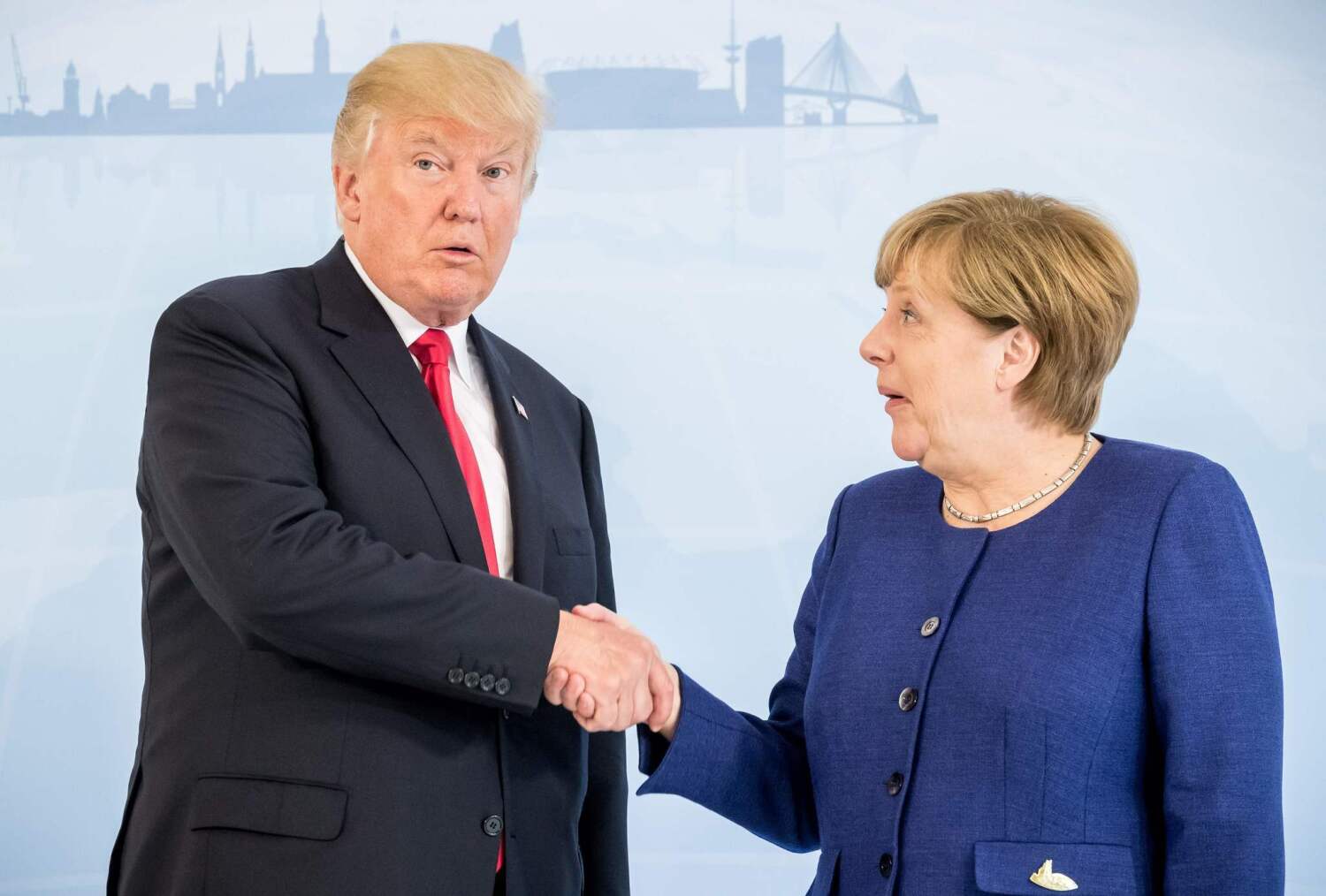 To shake or not to shake.

That is the question bedeviling billions around the world as the coronavirus spreads nefariously from continent to continent. Whether it’s still safe to shake hands in the age of the pandemic is an especially touchy issue in Germany and across Europe, where the handshake custom is thought to have originated more than 2,000 years ago and it’s arguably more commonplace than anywhere else.

Angst about the wisdom of continuing such a deeply entrenched tradition before and after essentially every meeting of friends, family and business partners is spreading across Europe as fast as the virus itself. In Germany, even its leader, Chancellor Angela Merkel, felt a need to weigh in on the issue on Friday evening with a message to all Germans — not shaking is OK now.

“I’m not going to shake anyone’s hand tonight,” Merkel said bluntly at the end of a speech to about 400 local business leaders and constituents in her electoral district of Stralsund, where she would normally be expected to press the flesh with hundreds, if not quite all those in attendance. She urged Germans to stay calm and respond prudently to the pandemic that spread to Europe from Asia in recent weeks.

There are now 117 confirmed cases of coronavirus in Germany — although no deaths have been reported — and the number has been rising daily.

“Germany is among the countries with the best possible conditions to deal with this virus,” she said, just hours after Berlin organizers announced that the world’s biggest travel convention, the March 4-8 ITB in Berlin, was being canceled even though 160,000 people from around the world were expected.

“Not every event needs to be canceled. And on top of that, every single one of us can make a contribution,” she said, before making the reference to not shaking hands.

The Western custom of shaking hands is believed to date to antiquity. A funeral stone from the 5th century BC on display in Berlin’s Pergamon Museum shows two Greek soldiers shaking hands.

The act was believed to be a symbol of peace — to show that that neither man was carrying a weapon in their right hand. Some historians have said the shaking gesture was added by knights in the Middle Ages as a way to probe if any knives were being concealed up the other person’s sleeve and could be shaken out.

Whatever the origins of the gesture now considered a polite and almost essential way to greet someone in many Western cultures, it is the ubiquitous manner Germans of essentially all ages introduce themselves. It’s customary for Germans to shake hands when they meet someone for the first time, as is the case in many other countries. But foreigners are often bewildered by how widespread handshaking is here: Germans will also often shake hands with everyone in the room at the start and end of meetings — as well as on their birthdays with just about everyone in the office or even the entire building.

Children readily learn the ins and outs of haendeschuetteln from a preschool age and every member of a soccer, basketball or volleyball team will usually shake hands with everyone else before and after every practice or game. Construction workers and tradesmen often spend the first five or 10 minutes of their shift shaking hands with everyone on sight — and repeat the practice at quitting time.

These rules occasionally lead to awkwardly comical scenes where Germans are seen thrusting but then dramatically withdrawing in embarrassment their outstretched arms when they realize either a woman or a more senior man is discovered standing nearby.

To decline an invitation to shake an outstretched hand is considered a serious insult in Germany — and President’s Trump intentional or unintentional avoidance of Merkel’s hand in the White House in March 2017 continues to reverberate as the ultimate rebuke in the German media.

Trump later said he did not hear photographers asking for the two leaders to shake hands.

“I’ve been avoiding shaking anyone’s hand lately because of the coronavirus,” said Dagmar Rettkowski, a 72-year-old retired airline worker who used to shake scores of hands with everyone on her Berlin volleyball team — and recalled that in Communist East Germany shaking hands was even more prevalent than in reunited Germany. “Now I just smile, raise my arm and wave and say ‘hello’ to everyone. It works fine.”

German companies such as Volkswagen and Lufthansa have issued warnings to their employees to refrain from shaking hands with colleagues and customers.

“Do not shake other people’s hands and try to avoid contact with doorknobs as well as pens and other belongings from other people,” Lufthansa wrote in an internal medical advisory to employees in Germany. Posters reading “Hoeflich ohne Haendedruck – Machen Sie mit” (Being polite without shaking hands — take part) were seen at Volkswagen plants, according to Bild newspaper.

The coach of German professional soccer team TSV 1860 Muenchen, Michael Koellner, said last week that he and his players would no longer shake hands with one another or opposing teams before and after games and hoped the entire Bundesliga professional league would follow suit.

“I’ve stopped shaking hands with patients, and I’ve been trying to avoid shaking anyone’s hand anymore, even though it’s sometimes almost impossible to avoid,” said Martina Henrich, a general practitioner in Berlin. “People can pass along more germs shaking hands than through kissing. In times like this, I’d urge everyone to avoid unnecessary hand-shaking.”

That’s a message Israeli Prime Minister Benjamin Netanyahu was evidently trying to spread last week when he declined to shake hands at a campaign event in Hebron. Instead, he reportedly bowed and offered the Hindu greeting “namaste” — which is made by placing the palms together, thumbs against the chest and head bowed.

Handshakes are considered a Western custom in many Asian countries and so, aside from handshake-filled business meetings, the issue may not be as pressing. Bowing at a 45-degree angle is considered the polite salutation in Japan while bows or nods without physical contact are sufficient in South Korea, Taiwan and elsewhere. There is also a Chinese greeting that involves making a fist with one hand and using the other hand to cup it.

“In a lot of other countries and cultures, people tend to shake hands far less than we do in Germany,” said Markus Fruehwein in an interview. The Munich physician and tropical medicine expert said he had been avoiding handshakes. “If you’re looking for ways to help prevent the spread of illnesses, skipping the handshake and offering a smile instead is a good idea. It sometimes doesn’t go down well when you pull back from shaking hands with patients, but most understand it now.”

“Usually it’s completely normal to shake hands as a sign of respect and appreciation, but who would really want to endanger someone else so unnecessarily?” said Barbara Engelmann, a 56-year-old Berlin teacher. “A friendly smile and being direct about the issue works wonders. I’ve had nothing but good experience so far in turning down handshakes like that.”

Along with smiles instead of handshakes, some Europeans are switching to fist bumps, elbow bumps, hat tips and simple nods. Others are hoping for the coronavirus to pass soon enough so that no one will be afraid of shaking hands anymore.

“I think this is just going to be a temporary adjustment in behavior because of the coronavirus situation,” said Cem Oezdemir, a leader in the Greens party, in an interview that took place without a handshake. “I don’t think shaking hands will disappear forever from Germany. It’s part of who we are. It makes sense to refrain now. But I’m sure it’ll come back and I’m looking forward to it because shaking hands is an important part of my job.”