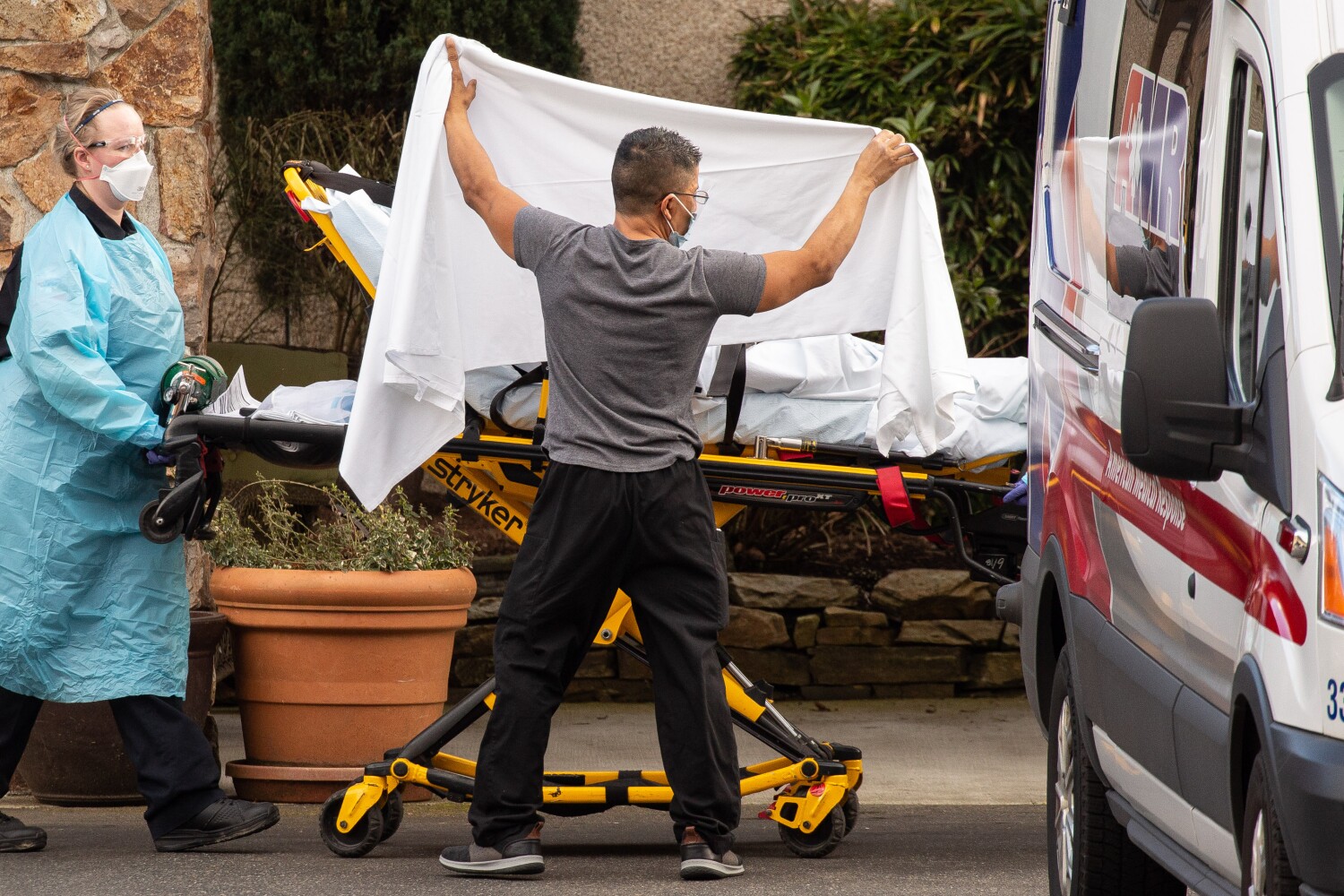 The number of U.S. deaths from coronavirus has risen from two to six — all in the Seattle suburb of Kirkland, Wash., where health authorities are battling an outbreak in a nursing home.

King County officials said Monday that three of the latest victims — a man and woman in their 70s and a woman in her 80s — died Sunday and had been residents at Life Care Center of Kirkland, the nursing home that had already seen one death last week. Dozens more residents have respiratory symptoms and are being tested for the virus.

The other new fatality was a man in his 40s from Snohomish County, according to officials there. Like all the U.S. victims to date, he died at EvergreenHealth Medical Center in Kirkland, just east of Seattle.

A dozen other people in Washington — the only state that has reported COVID-19 fatalities — have tested positive for the virus, officials said. Nine are in King County and the rest are north of Seattle in Snohomish County.

“This is a complex and unprecedented challenge locally, nationally and globally,” Dr. Jeff Duchin, health officer for Seattle and King County, said at a news conference in Seattle. “We expect the number of cases will increase in the coming days or weeks. The risk for all of us of becoming infected will be increasing.”

The U.S. Centers for Disease Control and Prevention has had a 10-person team stationed at the nursing home since Saturday and was sending more workers there Monday.

Of the 14 coronavirus cases in King County, eight have been linked to Life Care, Duchin said.

Two Kirkland police officers and 26 firefighters — a quarter of the city’s fire department — are “self-quarantined” because they came in contact with residents and employees of Life Care during calls there.

“We do have firefighters that are showing symptoms” of respiratory illness, Kellie Stickney, a spokesperson for the city, said in an interview Monday evening.

She declined to say how many had symptoms or whether they had been tested for the virus, referring inquiries to state health officials, who said they did not immediately have information.

Most of the firefighters and police officers are remaining in their homes for 14 days after contact, though some have chosen to stay at a fire station set aside for quarantine. One firefighter completed quarantine Monday after 14 days without symptoms, Stickney said.

Dow Constantine, executive of King County, which includes Seattle and Kirkland, said that the county was in final negotiations to buy a hotel where patients can be placed in isolation and was also setting up modular housing originally acquired to shelter homeless people.

He announced a state of emergency in the county Monday, allowing overtime for employees and the purchase of supplies. Duchin said that officials were debating whether to recommend school closures or widespread cancellation of events.

“Certainly we are beginning to think very hard about that this week,” he said.

The F5 Networks technology company closed its 44-story tower in downtown Seattle on Monday after learning that an employee had been in contact with someone who had tested positive for the virus. More than 10 schools in the Seattle area have been closed for disinfection.

Health officials now believe that the virus has been spreading for weeks within the area. Researchers have linked the case of a high school student who tested positive Friday to that of the first U.S. diagnosis, a Seattle-area man who became sick in January after returning from Wuhan, China — where the global outbreak began — and recovered after receiving treatment in isolation.

Events are moving so quickly in the Seattle area that officials at the morning news conference initially put the death toll at five. But then a doctor from EvergreenHealth Medical Center stepped to the lectern and said a sixth person had died.

“We now at this time have 10 confirmed cases of COVID-19 at EvergreenHealth,” said Dr. Ettore Palazzo, the hospital’s chief medical and quality officer.

Patty Hayes, director of public health for Seattle and King County, pointed out that “the vast majority of people who are infected by this virus will not have serious illness.”

“We will get through this by staying informed and united,” she said.

Hayes noted a run on face masks in the Seattle area, where people have been advised to stock up on food and supplies and to make contingency plans for working from home. But she urged people to save dwindling supplies of masks for use by healthcare workers.

Masks are also advised for infected people when they are in public, according to the World Health Organization.

Duchin said that hospitals were overburdened as people arrived to be tested.

“Even this early in the outbreak, our hospitals are feeling the strain,” he said. “It’s impossible for me to predict what the peak of this outbreak will be.”

In Kirkland, a city of 90,000 residents on the east shore of Lake Washington, Mayor Penny Sweet said Monday that when emergency dispatchers determine that people at a scene have symptoms of respiratory illness, medical personnel who respond put on gowns, gloves, masks and eye protection.

“The most important thing is that we keep calm, and we keep people able to manage themselves until somebody gets so sick that they need to be managed in a hospital,” she said.